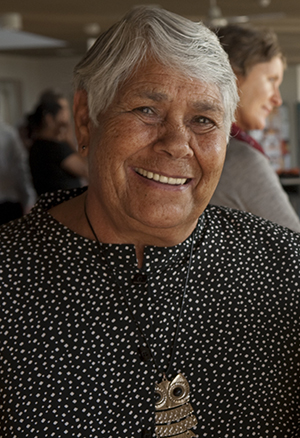 Renamed ‘Lois’ by the missionaries, she and her sisters grew up at Colebrook Children’s Home and did not see their mother again for more than thirty years. They weren’t allowed to speak their own language or to ask questions about their origins or even about their parents.

Dr O’Donoghue attended Unley General Technical High School in Adelaide and set her sights on becoming a nurse. But, after initial training, she was refused entry to the Royal Adelaide Hospital to continue her studies because she was Aboriginal. She fought the decision—thus beginning her lifelong advocacy for Aboriginal rights—and in 1954 became the first Aboriginal trainee nurse at the hospital. Dr O’Donoghue graduated and became a charge sister at the hospital, where she stayed for ten years.

After spending time in the mid-1960s at the Baptists Overseas Mission in Assam, India, Dr O'Donoghue returned to Australia and joined the Department of Aboriginal Affairs. She accepted a position in the remote South Australian town of Coober Pedy where an aunt and uncle, noticing the family resemblance, recognised her in a local supermarket. Through this chance meeting she was finally reunited with her mother, Lily, who by this time was living in the nearby town of Oodnadatta.

In March 1990, Dr O'Donoghue was appointed the founding Chairperson of the Aboriginal and Torres Strait Islander Commission (ATSIC); during this time she played a key role in drafting the Native Title legislation that arose from the High Court's historic Mabo decision.

Dr O'Donoghue has received numerous awards and accolades for her work. She was made a Commander of the Order of the British Empire (CBE) in 1983 and Australian of the Year in 1984, during which time she became the first Aboriginal person to address the United Nations General Assembly. She won the Advance Australia Award in 1982, was named a National Living Treasure in 1998, and awarded Companion of the Order of Australia (AC) in 1999 and Dame of the Order of St Gregory the Great (DSG), a Papal Award, in 2005.

in 2021 she was awarded a “lifetime contribution to the advancement of Aboriginal and Torres Strait Islander rights, leading to significant outcomes in health, education, political representation, land rights and reconciliation” from the University of Adelaide.

When Dr Lowitja O’Donoghue agreed to have the Lowitja Institute named after her, she entrusted in the organisation her spirit and energy, her values and priorities. Dr O’Donoghue told the Institute to be a courageous organisation committed to social justice and equity for Aboriginal and Torres Strait Islander people, to match words to action, to achieve real tangible and immediate outcomes. Also, to be known throughout Australia as a strong and sustainable organisation working fearlessly for change and improvement in the lives of Aboriginal and Torres Strait Islander people.