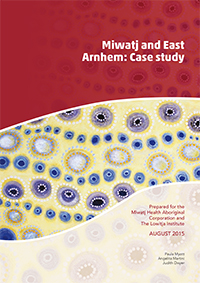 
This publication is one of five that report on the work of the Funding, Accountability and Results (FAR) project, all published by the Lowitja Institute in 2015.

FAR is a study of reforms in primary health care for Aboriginal and Torres Strait Islander communities in the Northern Territory (between 2009 and 2014) and Cape York, Queensland (between 2006 and 2014).

This case study documents the engagement of the Miwatj Health Aboriginal Corporation (Miwatj) and the communities and leaders of the East Arnhem Region in the planning and implementation of the Pathways regionalisation program led by the Northern Territory Aboriginal Health Forum (NTAHF) from 2009 to 2014. The study is based on interviews with 20 people—14 Aboriginal Community Controlled Health Organisations (ACCHOs) staff (including three people who also served in community representative roles), five current and former government staff and one community representative—and on analysis of 98 publicly available or internal NTAHF and Miwatj documents.