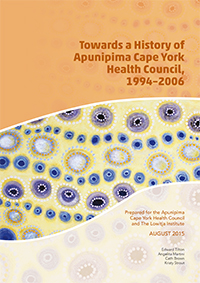 
This publication is one of five that report on the work of the Funding, Accountability and Results (FAR) project, all published by the Lowitja Institute in 2015.

FAR is a study of reforms in primary health care for Aboriginal and Torres Strait Islander communities in the Northern Territory (between 2009 and 2014) and Cape York, Queensland (between 2006 and 2014).