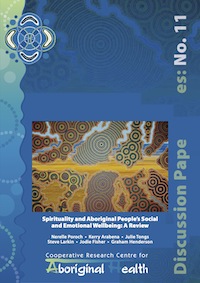 
The link between Aboriginal spirituality and Aboriginal peoples’ social and emotional wellbeing is a little researched area but one which has significant implications for individual and community health, in particular its role in building resilience within colonised populations. This review emerged out of a 2006 CRCAH Roundtable to identify priorities around Aboriginal social and emotional wellbeing, and looks at both the broad differences between Aboriginal and non-Aboriginal spiritual concepts and the ways in which the two concepts have intermingled over time. It also examines the way ceremony, art and song have helped build resistance to the colonisation of Aboriginal spirituality. Chapter Five includes an annotated bibliography of relevant literature spanning the years 1973 to 2008.