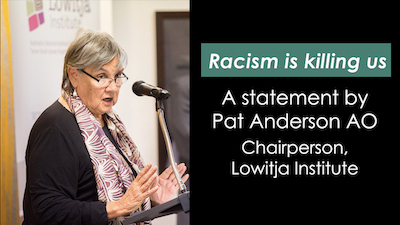 The Black Lives Matters protests, here in Australia and across the world, are sounding cries of anguish and anger about the unrelenting impact of racism on our lives.

Reflecting on this, I was struck by an important comment from leading Aboriginal psychologist and academic Professor Pat Dudgeon.

“There are very few Aboriginal people who wouldn’t have suffered racism”, Pat said, going on to talk about a growing body of evidence showing that racism is detrimental to the mental health of Aboriginal and Torres Strait Islander people.

Her words echo strongly in the work of the Lowitja Institute, the national institute for Aboriginal and Torres Strait Islander health research.

Our work shows us that racism is widespread and it makes us suffer. It makes us sick.

We saw its scope and impact in key research that we funded many years ago, which documented very high levels of racism experienced by Aboriginal Victorians, and high levels of distress because of it.

Almost every person (97 per cent) of the 755 surveyed in 2011 in four Victorian communities had experienced at least one racist incident in the previous 12 months, with more than 70 per cent experiencing eight or more incidents a year.

This is not just abhorrent and an infringement of our rights. This causes life-long harm.

Studies here and from around the world tell us that racism is associated with causing psychological distress, depression, poor quality of life, and substance misuse. Prolonged, it can have significant physical health effects, such as on the immune, endocrine and cardiovascular systems.

Worryingly, our study showed that 40 per cent of participants indicated that they had experienced racism within the justice system and 30 per cent within health care systems.

We know that Aboriginal and Torres Strait Islander peoples will not seek out health care and will not work in health services if we do not feel culturally safe.

And we know from the families who took their heartbreak to the streets the last two weekends that racism in the justice system can be brutal and fatal.

Have things changed since the Lowitja Institute commissioned that landmark research?

And not according to the everyday experience of Aboriginal and Torres Strait islander people.

Yet instead of taking urgent action, our government criticises us for our protests. Instead of working to address historic injustice, our Prime Minister diminished it, declaring we should not be “importing the things that are happening overseas to Australia” and that “there was no slavery in Australia”. How can the leader of our country not know our history?

So, as the cries of #BlackLivesMatter continue to ring out across the globe, where do we go from here in Australia?

We need to acknowledge that racism is deeply entrenched in Australia and is a public health emergency for Aboriginal and Torres Strait Islander people.

That terrible reality is there to be read clearly in the current National Aboriginal and Torres Strait Islander Health Plan, which identifies racism as a key driver of ill-health.

It is there to be read in the Uluru Statement to the Heart. In the critiques of the Closing the Gap strategy.

It is in the recommendations of the Royal Commission into Aboriginal Deaths in Custody which has at their heart, as Professor Megan Davis said last week, the need to address “the structural powerlessness that renders Indigenous voices silent” in our nation.

It is time to end that silence. And it is time for governments to hear us.