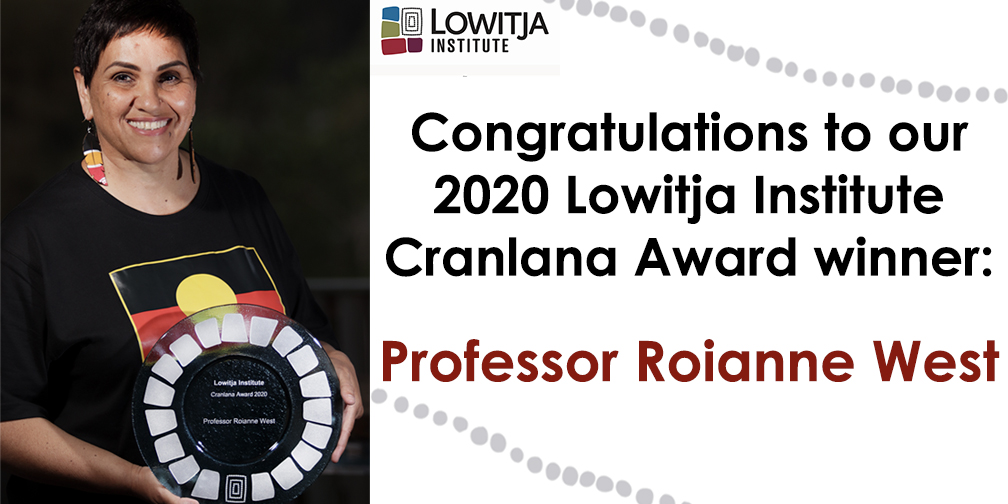 “Professor West is an invaluable member of the Lowitja Institute Research Advisory Committee, and her contributions in this role have shaped the direction of Aboriginal and Torres Strait Islander health research throughout Australia,” Dr Mohamed said.

Born and raised Kalkadoon on her grandmother’s ancestral lands in North West Queensland and with connections to the Djaku-nde peoples in South West Queensland, her work builds on a family legacy that includes four generations of Aboriginal nurses and a long line of healers.

Dr Mohamed said Professor West’s research and academic leadership has focused on the recruitment, education and training of Aboriginal and Torres Strait Islander peoples into health professions, and challenging the wider health workforce and system.

“Within and beyond her faculty, she has implemented widespread and systematic reform in how Aboriginal and Torres Strait Islander health is taught.”

The award is presented by the Lowitja Institute and Cranlana Centre for Ethical Leadership, and offers a fully-funded position in Cranlana’s Executive Colloquium.

"It is appropriate that an award for excellence and leadership goes to Professor Roianne West," Cranlana Centre for Ethical Leadership chief executive Vanessa Pigrum said.

“Her life-long commitment to Indigenous health, particularly her focus on the recruitment and retention of the Aboriginal and Torres Strait Islander health workforce, contributes to a stronger system which can better serve patients and their families,” she said.

“We know Roianne will bring rigour to the conversation and look forward to welcoming her to the Executive Colloquium. Congratulations Roianne!” Ms Pigrum said.

Professor West said she was thrilled to be recognised in such a way by Australia's national Aboriginal and Torres Strait Islander Research Institute, within the legacy of its namesake Lowitja O'Donoghue, as it moves into its new role as a community controlled organisation.

“To win this award at a time when the Lowitja Institute is going through such a transformation is an honour and a privilege,” she said.

For media queries and/or to arrange an interview with Dr Mohamed or Professor West, please contact Marie McInerney on 0418 273 698.

For more information about Cralana Centre for Ethical Leadership: https://cranlana.org.au/programs/the-colloquium/